A Pillow With Circular Pattern In Shades Of Turquoise

Turquoise Pixel Pattern On A Pillow To Accent Your Living-Room

Turquoise Pixel Pattern On A Pillow To Accent Your Living-Room

Customize It And Tell Your Story

Both pillows and travel destination photo collages allow customization, such as the fill color, surface pattern size, and replacing all or single photos with your ones.
If you like a displayed photo collage layout, you can exchange all images and text and use it for any personal story.

Personalized photo story ideas include school events, achievements, trips, holidays, graduation, birthday, Christmas, or any other personal or family celebration or moments of change and importance that are worthwhile to tell in a photo story. 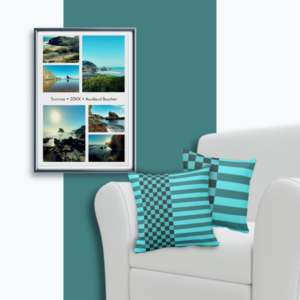 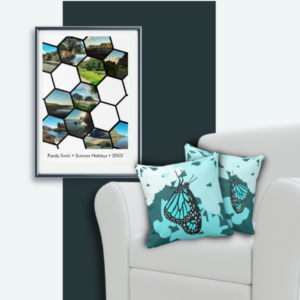 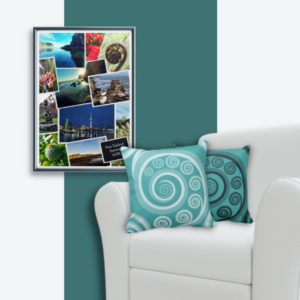 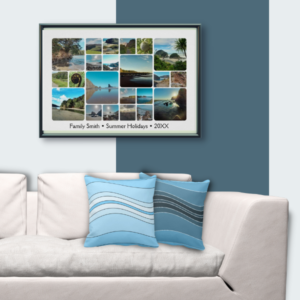 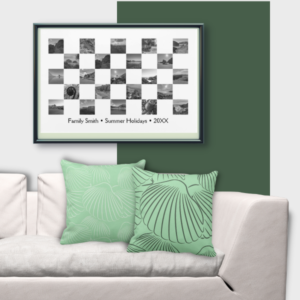 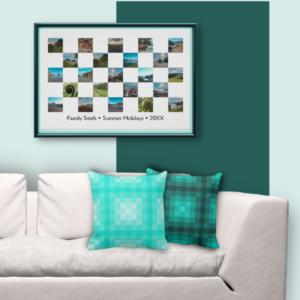 Turquoise and orange pillows are a great and inspiring summer combination. Given this, KBM D3signs presents six living room decoration ideas using vivid colored wall decor by Chris Rice to pair up with throw pillows in turquoise and orange.

Why choose turquoise and orange pillows in your summer living room decor?

Orange finds its place as a secondary color between red and orange. For this reason, the color has characteristics of each of the colors, such as joy, communication, and spreading loving energy. Pairing orange with its complementary color turquoise supports the summer vibe. The energetic expression of turquoise relates to communication and creativity.

Both colors show desirable attributes for a family living room to inspire a vivid, communicative and creative space filled with love and laughter.

Who is Chris Rice?

“Mine is a life inspired by the beauty and color of nature, the contemplation of God, and the humor tucked into small everyday moments. Driven to communicate all of this through creative means, I am overwhelmed by the privilege, and happy to find my work reaching so many people in meaningful ways.”

Turquoise throw pillows with a waved ripple pattern mimic, a peaceful and steady ripple of the sea rolling towards the shore. And are in the center of the decoration idea exploration with a modern white couch.

The color turquoise is associated with creativity and communication. Light turquoise reminds me of summer and the coolness of a dip into the sea.

Square pillows display the rippled pattern design in four variations. First, there is the differentiation between lightened and subdued shades of the repeat pattern. Second, the reduction to two colors of turquoise and black or white. Fourth, the pattern size returns different expressions too. Fifth and last, direction varies between horizontal, vertical, and diagonal.

Each direction shows ten color examples, including apart of turquoise the colors: yellow, grey, red, pink, purple, orange, brown, blue, and green. These form one collection that then shows the black, white, lightened, and subdued pattern in each pattern direction.

A feature that all examples have in common is the invitation to modify the fill color if it does not match your home decoration project requirement.

Inspiration is everywhere. In the following examples: seascapes were initiators to the series of ten pillow pair decors.